AUC’s role in the electric industry

​The Alberta Utilities Commission’s goal is to ensure safe, reliable electricity when Albertans switch on their lights and power up their electronics, and for those same customers to receive just and reasonable rates when they pay their electricity bills.

The AUC is responsible for making decisions about applications to construct, operate, upgrade and decommission electric transmission and distribution power lines that deliver electricity to Alberta homes and businesses. The AUC ensures that applications fit the electricity plan developed to meet the electricity need and forecast set by the Alberta Electric System Operator. It considers the public interest and the social, economic and environmental impacts from its decisions about proposed transmission lines. Applications for new or modified electric transmission development require an Alberta Electric System Operator (AESO) submission of a needs identification document, except for grandfathered projects that were designated by the government as critical transmission infrastructure. As guided by legislation, the AUC must consider the AESO needs identification document to be correct and it will be approved – unless someone proves that it is technically deficient or not in the public interest.

In Alberta 26,000 km of transmission lines, and more than 200,000 km of distribution lines serve the electricity needs of about four million people across a wide geographic region through more than three million metered sites including homes, businesses and workplaces. ​

The AUC is responsible to review applications for power plants that generate electricity using wind, solar, biomass, water or fossil fuel, to determine if the site of a proposed development should be approved. When the AUC considers and makes decisions about the siting of power plants it considers concerns such as potential property impacts, environmental impacts, and noise, among other issues, however it does not determine if and where in the province power generation should occur as electric generation is deregulated.

The AUC is the adjudicator that has a fair and just process to consider allegations of market wrongdoings in Alberta’s wholesale electricity market. It has an important role to make sure the electricity market functions properly, and that energy trading is conducted in a fair, efficient and competitive matter.

The AUC interacts with Alberta’s wholesale electricity market operator (and transmission system operator), the Alberta Electric System Operator or AESO, and a watchdog for the electric market called the Market Surveillance Administrator, or MSA. The MSA must and any electric market participant may make a complaint or refer a suspected contravention of market rules to the MSA. The MSA can investigate the matter and may bring the matter as a complaint to the AUC for adjudication. Depending on the type of contravention, if proven in an AUC proceeding, penalties can be applied by the AUC. These penalties range up to $1 million per day per contravention, plus a disgorgement of any economic benefit (or profit) that accrued through the contravention. 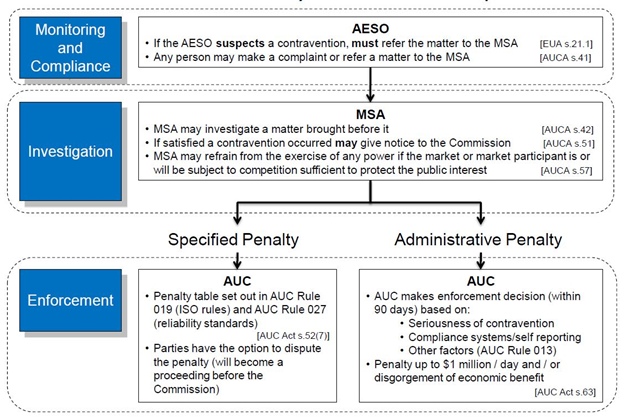 The AUC requires regulated utilities to quarterly and annually provide a detailed service quality report that provides extensive information and reporting about utility-specific energy outages and customer service standards. It also ensures that customers are treated fairly. Regulated utilities are expected to perform within strict standards set by the AUC, contained in two AUC rules, Rule 002 and Rule 003. Staff of the AUC review these reports and meet with utility officials at least once annually to dis​cuss utility performance, including customer complaints, and investigate shortcomings if they occur. When necessary an enforcement proceeding can be initiated to deal with sub-par performance. The AUC’s performance standards for regulated utilities include standards for:

The AUC determines transmission rates through an in-depth, evidence-based and fair regulatory process that involves reviewing the costs required to build, maintain and operate large-scale utility infrastructure. The AUC’s role is to ensure that companies can recover reasonable costs incurred to meet the need required to provide transmission service, and have a reasonable opportunity to earn a fair rate of return.

The AUC determines distribution rates using an incentive-based formula, called performance-based regulation or PBR. This forward-thinking method of ratemaking was implemented by the AUC in 2013 and works to mimic the forces of competition and provide incentives to utilities to reduce costs. Its goal is to constrain consumer rates to less than what they might otherwise be by limiting rate increases to the rate of inflation less a demanding industry efficiency factor and a stretch factor. Since implementing PBR, the AUC has reviewed the approach and adjusted how it works to further improve the effectiveness of the PBR system.